The Holocaust Center is proud to partner with Carnegie Mellon Department of Modern Languages and Rodef Shalom to host a screening and discussion of the film Sterne (Stars) to mark International Holocaust Remembrance Day. This will be the first time the award-winning film has been shown in Pittsburgh. 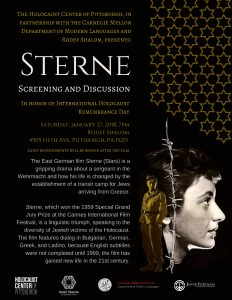 Sterne takes place in a secluded Bulgarian village in 1943. Walter, an artist and sergeant in the Wehrmacht, lives a quiet life far away from the war. Then one day a transit camp is set up for Jews arriving from Greece. Ruth, one of the Greek Jews, asks Walter to help a pregnant woman in the camp. At first he refuses, but soon his life is changed forever.(source: DEFA Film Library, https://ecommerce.umass.edu/defa/film/3582)

This East German Film, which won the 1959 Special Grand Jury Prize at the Cannes International Film Festival, broke with conventions during the Cold War in its depiction of Wehrmacht soldiers and Jewish suffering and resistance.

The film is also significant linguistically, speaking to the diversity of Jewish victims of the Holocaust, with dialog in Bulgarian, German, Greek, and Ladino, the language of Sephardic Jews. English subtitles for all languages were completed in 1999, giving it new life for Americans in the 21st century.

After the film, we will engage in a discussion about the film over light refreshments,as well as share more historical information about Sephardic Jews, a largely undiscussed minority within the Jewish population.

Tickets are $10. Free for students (with valid student ID) and survivors. Contact Christina Sahovey (csahovey@hcpgh.org or 412-939-7289) with questions.