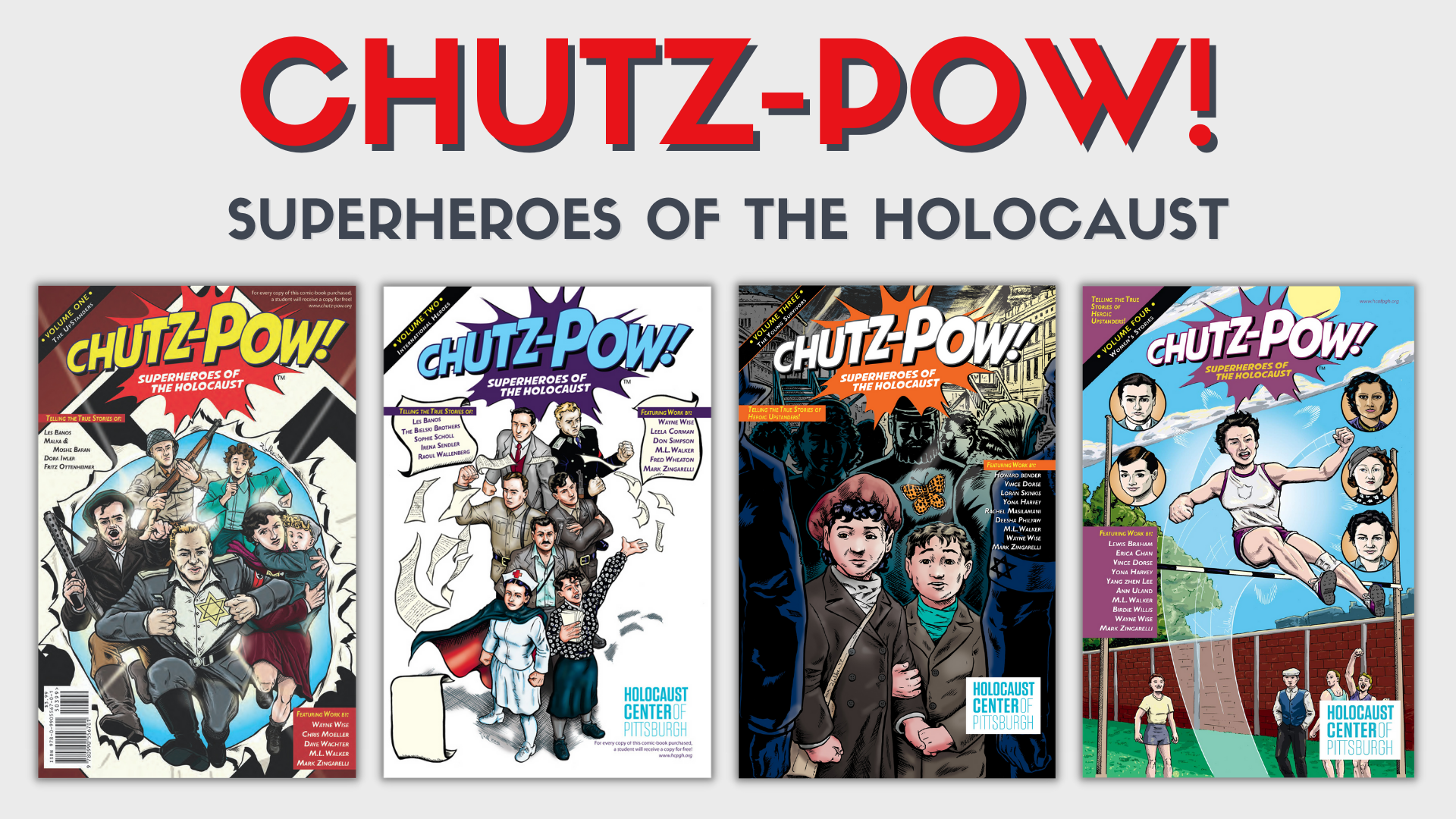 When discussing CHUTZ-POW!, we frequently use the term “upstander”. An upstander is one who speaks up when they see something is wrong and acts to make the situation right; this is considered the opposite of a “bystander”. Every real-life hero featured in CHUTZ-POW! is an upstander, and these stories are designed to encourage readers of all ages to be upstanders too!

CHUTZ-POW! SUPERHEROES OF THE HOLOCAUST is an acclaimed and ongoing comic-book series created and published by The Holocaust Center of Pittsburgh that seeks, as its mission, to place stories of UpStanders’ courage, resilience, and sacrifice at the forefront of Holocaust awareness. Each volume is an anthology by award-winning creative collaborators, telling true-life stories of heroic survivors who brought light into some of the darkest recesses of World War II.

Created for both general and scholastic audiences ages 12 and up, CHUTZ-POW! unravels the larger narrative of the Holocaust with thematic volumes that explore the documented micro-histories of its profiled subjects. With vivid, historically-accurate art and stirring fact-based writing, these are stories that defy the expectations of conventional superhero comic books.

VOLUME ONE: THE UPSTANDERS introduces readers to five survivors who each used various forms of resistance to defy the Nazis before eventually relocating to Pittsburgh; VOLUME TWO: INTERNATIONAL HEROES tells the dramatic stories of other, more globally well-known figures. VOLUME THREE: THE YOUNG SURVIVORS focuses on the stories of survivors who were children during the Holocaust. VOLUME FOUR: WOMEN’S STORIES, released in 2019, focuses on the true narratives of six women whose stories illustrate the unique struggles and triumphs faced by women during the Holocaust.

The Holocaust Center has also created The CHUTZ-POW! Teacher’s Resource Guide which provides well-researched supplemental material to fully assist educators in utilizing the series in academic settings. The guide includes a timeline of related events, background information on the subjects and locations, a glossary of terms, lesson plans, other suggested reading, and more.

CHUTZ-POW! is far more than a comic-book: it’s a living testimony of perseverance and bravery created to directly connect contemporary audiences with some of the most important moral lessons of history.

“When you’re acting as a superman, you’re teaching your children to be supermen.”

CHUTZ-POW! SUPERHEROES OF THE HOLOCAUST can be purchased online and at locations across the country, including:

*Interested in becoming a CHUTZ-POW! Ambassador and bringing The CHUTZ-POW! Project to your area? Contact us for info!

The diverse group of creators who have worked on CHUTZ-POW! SUPERHEROES OF THE HOLOCAUST include numerous award-winning writers and artists from the comic-book/graphic-prose industry and beyond. Contributors to date include:

Howard Bender is a professional comic book illustrator who has worked for many of the top publishers, including Marvel, DC, Disney, Harvey, and Archie. Characters and titles include SUPERMAN, SPIDER-MAN, THE LEGION OF SUPER-HEROES, GHOSTBUSTERS, ARCHIE, CASPER and RICHIE RICH. He has also worked as an art instructor and created and drawn his own original characters and titles, MR. FIXITT, BILLY & POP, and THE SHERLOCK HOLMES MINUTE MYSTERIES.

Lewis Braham’s writing has appeared in the Pittsburgh Post-Gazette, Bloomberg, Reuters, Ekphrastic Review, Tuck Magazine, Barron’s and the Wall Street Journal. He has an MFA in creative writing from Brooklyn College.

Erica Chan is an illustrator and comic artist from New York City and an alumni of Carnegie Mellon University and the School of Visual Arts. Her comic work has been featured in Margin Publishing's DATES! anthology series, ComicMix's MINE! anthology, and the graphic novel QUEEN OF KENOSHA. More of her work can be viewed on ericachan.net

Leela Corman is an illustrator, cartoonist, and Middle Eastern dancer. She won a Xeric Grant in 1999 for the publication of her first graphic novel, QUEEN’S DAY. Her latest graphic novel, UNTERZAKHN, was published by Schocken/Pantheon in the spring of 2012, and has been nominated for the L.A. Times Book Award, the Eisner Award, and Le Prix Artemisia in France. In 2014, her comic YAHRZEIT won a silver medal from the Society of Illustrators. Her clients include PBS, the New York Times, and BUST Magazine.

Vince Dorse is an illustrator, cartoonist, and the creator of the Reuben Award-winning long-form comic UNTOLD TALES OF BIGFOOT. His work has an all-ages appeal, and has appeared in books, magazines, newspapers, games, online, and in Chutz-Pow Vol.3.  He specializes in cute animals and kid-friendly monsters. In between illustration jobs for clients, Vince publishes books, comics, and art through his Long Lost Friend Studio small press imprint.

Yona Harvey is an award-winning poet and writer. She won the 2014 Kate Tufts Discovery Award and the 2016 Carol R. Brown Creative Achievement Award for Established Artist. Her published work includes the poetry collection Hemming the Water from Four Way Books, and she has written for Marvel Comics on two of their Black Panther-related series, World of Wakanda and Black Panther & The Crew.

Yang Zhen Lee is an illustrator and tattoo artist that works in the beautiful city of Pittsburgh, PA. They draw comics, do performance art, and think about ways art affects community and vice versa. You can find their tattoos and comics on their instagram @yangzhenlee

Rachel Masilamani is a Pittsburgh-based comics creator who has been quietly amassing a unique and significant body of work since the dawn of the century.  She started off strong, being awarded a Xeric Grant for the first issue of her series RPM COMICS, and has continued to craft her finely nuanced, personal works in small-run self-published comics and anthologies like The Indiana Review, Graphic Classics and Aster(ix).  She is currently working on a new graphic novel, NONPARTUM, which is being published in installments on Mutha Magazine.

Deesha Philyaw is a Pittsburgh-based writing professor and freelance writer whose work has appeared in The New York Times, The Washington Post, Essence magazine, and other outlets. She holds a B.A. in economics from Yale, as well as an M.A. in teaching. She writes, blogs, and tweets about race, parenting, and pop culture (sometimes all at once). For The Rumpus, she inaugurated and curates an interview column, VISIBLE: Women Writers of Color. She’s recently released her first novel, THE SECRET LIVES OF CHURCH LADIES from West Virginia University Press.

Donald E. Simpson illustrated Al Franken’s 2003 bestseller LIES AND THE LYING LIARS WHO TELL THEM: A FAIR AND BALANCED LOOK AT THE RIGHT and earned a PhD in art and architectural history from the University of Pittsburgh in 2013. His science fiction saga BORDER WORLDS will be collected with a new conclusion by Dover Publications later in 2016, and he is currently at work on MEGATON MAN: RETURN TO MEGATROPOLIS, an all-new graphic novel of his famous satirical character.

Loran J. Skinkis is a full-time freelance illustrator and graphic designer based in Pittsburgh, Pennsylvania. He joined the United States Marine Corps Reserves in 1989 and served overseas in Saudi Arabia during the Persian Gulf War (1991). Upon returning home, Loran attended the Art Institute of Pittsburgh. His published work includes such titles as PHOTOCOPY COMIX ILLUSTRATED, THE ELECTRIC OWL, STAR & STRIPES, BURGH-MAN, and most recently THE FIELD ON THE EDGE OF THE WOODS. He is currently working on many new and exciting projects both locally and overseas.

Ann Uland is a visual story artist, freelancer, and co-founder of Arbitrary Muse Comics, with 7+ years experience working, creating, and selling comics and art. Ann has a BFA in Sequential Art from Savannah College of Art and Design, and past credits include the charity anthology for PRINCELESS, and the SPACE award-winner IF THE SHOE FITS.

Dave Wachter’s professional career includes his artwork for Robert Bloch’s THAT HELLBOUND TRAIN, GODZILLA and TEENAGE MUTANT NINJA TURTLES, and the mini-series NIGHT OF 1,000 WOLVES (all from IDW Publishing). In 2012, he was nominated for the Russ Manning Most Promising Newcomer Award in comics, and he was the artist for the mini-series BREATH OF BONES: A TALE OF THE GOLEM for Dark Horse Comics. In 2014, Dark Horse released a hardcover edition of his Eisner and Harvey Award nominated web-comic THE GUNS OF SHADOW VALLEY.

Marcel (M.L.) Walker has provided cover and story artwork for all four volumes of CHUTZ-POW! SUPERHEROES OF THE HOLOCAUST and also currently serves as the project coordinator. He graduated from the Art Institute of Pittsburgh, and during the 1990s was a graphic-prose instructor at the Pittsburgh Center for the Arts. Currently, he is the board president of Pittsburgh’s ToonSeum, The Museum of Cartoon Art, and has contributed artwork to their NORTH and OAKLAND anthology comic-books. He is the creator/writer/artist of the independent comic-book HERO CORP., INTERNATIONAL. In 2017, he was voted Best Local Cartoonist in The Pittsburgh City Paper’s annual readers’ poll; in 2018, he was a recipient of the BMe Genius Award.

Birdie Willis is a queer, nonbinary creator who has been writing comics for almost ten years now. Most recently, she has had two works published by BOOM!Studios - a five-issue miniseries for the Cartoon Network property OVER THE GARDEN WALL (2019), and a biography of renowned conservationist Rachel Carson, SEEN (2020) from Simon & Schuster. When she’s not writing, you can find her on an adventure with her wife Ann, or petting their two cats.

Wayne Wise is a freelance writer/artist living in Pittsburgh. He’s been the lead writer for all four volumes of CHUTZ-POW! SUPERHEROES OF THE HOLOCAUST. In the ‘90s, he co-created the Xeric Award-winning comic GREY LEGACY, and worked as an inker for Malibu Graphics. For 22 years he worked at Phantom of the Attic Comics (an Eisner Award-nominated comics retailer). He has four novels available, has served as an Executive Board Member for Pittsburgh’s ToonSeum, has taught “Comics and Popular Culture” as an adjunct professor at Chatham University, and continues to give lectures and presentations on comics history.

Mark Zingarelli is a native of Pittsburgh and has been a freelance cartoonist and illustrator for over 35 years. He has also worked as a lecturer, teacher, and journalist. He has had art studios in San Diego, California, Seattle, Washington, and now lives and works in Western Pennsylvania. His award-winning illustrations have been published internationally and he has worked on all four volumes of CHUTZ-POW! SUPERHEROES OF THE HOLOCAUST. His graphic novel SECOND AVENUE CAPER, published by Farrar Strauss & Giroux, won the Lambda Literary Award for the Best Graphic Novel of 2014.