In commemoration of the 80th anniversary of Kristallnacht, the Holocaust Center of Pittsburgh is proud to partner with Classrooms Without Borders to present The Children of Willesden Lane. 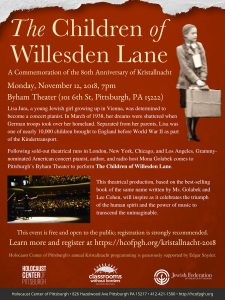 Following sold-out theatrical runs in London, New York, Chicago, and Los Angeles, Grammy nominated American concert pianist, author, and radio host Mona Golabek comes to Pittsburgh’s Byham Theater to perform The Children of Willesden Lane. This theatrical production, based on the best-selling book of the same name written by Ms. Golabek and Lee Cohen, will inspire as it celebrates the triumph of the human spirit and the power of music to transcend the unimaginable.

The Children of Willesden Lane tells the true story Ms. Golabek’s mother, Lisa Jura, a young Jewish girl and gifted pianist from Vienna who dreamed about her debut at the storied Musikverein concert hall. However, everything changed when the Nazi’s occupied Austria. Desperate to save their three daughters, Malka and Abraham Jura were able to secure just one ticket on the Kindertransport rescue mission and were faced with the unimaginable heartbreak of choosing which child to save.

Malka and Abraham chose 14-year-old Lisa, believing that music would give her the strength she would need to survive an uncertain future. Saying goodbye to Lisa at the Vienna train station, Malka told her, “Hold on to your music. It will be your best friend in life. I will be with your always through the music.” These were the last words exchanged by the mother and daughter.

Lisa found herself in an orphanage in London — on 243 Willesden Lane — where 30 Jewish refugee children lived under the care of Mrs. Cohen. During the day, Lisa worked as a maid, and later, in a factory making army uniforms. Every night,
Lisa would go into the orphanage basement to play the piano, blocking the sounds of the bombs that rained down as the Blitz ravaged London and praying for her family’s safety.

Mona Golabek learned to play the piano from her mother, Lisa Jura. “My mother started teaching me the piano when I was four years old,” she said. “She told me fantastic tales of that journey from old-world Vienna to a rambling orphanage at 243 Willesden Lane in London. I became a concert pianist because of those words and stories, and because of my mother’s passionate connection to music. Every piano lesson with her was a lesson about life, about love, and about faith.”

The Children of Willesden Lane is an exquisite blend of musical performance and storytelling — featuring the music of Grieg, Beethoven, Debussy, Bach, Chopin, and more — movingly performed by Ms. Golabek.

This event is free and open to the public as long as tickets are available. Registration is strongly recommended.