When the Smoke Clears: Reconciliation in the Aftermath of Violence 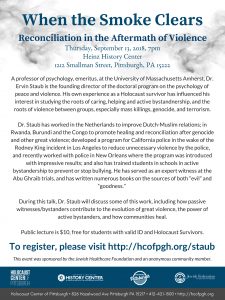 When the Smoke Clears: Reconciliation in the Aftermath of Violence

A professor of psychology, emeritus, at the University of Massachusetts Amherst, Dr. Ervin Staub is the founding director of the doctoral program on the psychology of peace and violence. His own experience as a Holocaust survivor has influenced his interest in studying the roots of caring, helping and active bystandnership, and the roots of violence between groups, especially mass killings, genocide, and terrorism.

Dr. Staub has worked in the Netherlands to improve Dutch-Muslim relations; in Rwanda, Burundi and the Congo to promote healing and reconciliation after genocide and other great violence; developed a program for California police in the wake of the Rodney King incident in Los Angeles to reduce unnecessary violence by the police, and recently worked with police in New Orleans where the program was introduced with impressive results; and also has trained students in schools in active bystandership to prevent or stop bullying. He has served as an expert witness at the Abu Ghraib trials, and has written numerous books on the sources of both “evil” and “goodness.”

During this talk, Dr. Staub will discuss some of this work, including how passive witnesses/bystanders contribute to the evolution of great violence, the power of active bystanders, and how communities heal.

Public lecture is $10, free for students with valid ID and Holocaust Survivors.

This event was sponsored by the Jewish Healthcare Foundation and an anonymous community member.

Dr. Staub will also be leading a Teacher Training earlier in the day. Learn more